“At the heart of this collection, are the people. The resilient men and women who have both contributed to the legacy of Oklahoma as well as the mosaic of our great nation in the area of art, music, science, exploration, politics, religion, architecture, literature, language, etc.”- Evelyn Cox, Public Broadcasting Preservation Fellow

The OETA News and Cultural Programming (1980-Present) Collection includes 74 programs and segments created since the 1980s by Oklahoma Educational Television Authority (OETA). It is a glimpse into the past, covering topics and exploring issues that are relevant to the diverse cultures of Oklahoma. The collection, which includes programs about Oklahoma history, documents issues and events such as the Oklahoma Land Run of 1889, the life and career of humorist Will Rogers, the women’s war effort in World War II, and the Oklahoma City Bombing. Also featured are individuals, such as, aviator Wiley Post, Boomer David Payne, the “Hanging Judge” Charles Isaac Parker, and many others. This collection is an eclectic mix of digitized at-risk public media material from the OETA Archive with contributions from the Oklahoma Department of Wildlife Conservation Archive.

The Oklahoma Educational Television Authority (OETA) is Oklahoma’s only statewide coordinated instructional and public television network. In 1951 the state legislature pioneered the growth of noncommercial educational television in the United States by unanimously approving House Concurrent Resolution Number 5, urging the Federal Communications Commission (FCC) to reserve television channels for educational purposes. In addition to offering television programs supplied by PBS and acquired from various independent distributors, the network produces news, public affairs, cultural, and documentary programming; the OETA also distributes online education programs for classroom use and teacher professional development, and maintains the state’s Warning, Alert and Response Network (WARN) infrastructure. The OETA network’s main offices and production facilities are located at the intersection of Kelley Avenue and Britton Road in northeastern Oklahoma City. The collection was digitized in 2018 by Evelyn Cox and Laura Haygood, Public Broadcasting Preservation Fellows, in collaboration with Oklahoma Educational Television Authority, through a project funded by the Institute of Museum and Library Services. 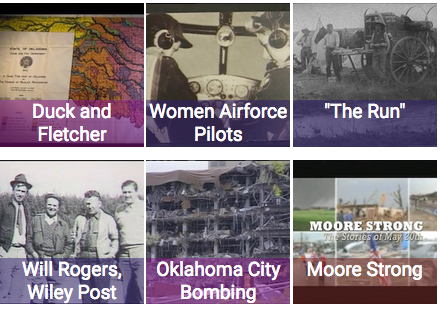