The Abolitionists takes place during some of the most violent and contentious decades in American history, … bitter debates over the meaning of the Constitution and the nature of race.  – American Experience

The Abolitionists Interview Collection is comprised of 51 raw interviews from the three-part American Experience miniseries of the same name, which aired on PBS in 2013. The series follows the lives of prominent abolitionists including Frederick Douglass, John Brown, Angelina Grimké, William Lloyd Garrison, and Harriet Beecher Stowe, and explores differing and often conflicting approaches to abolishing slavery in the United States.

The Abolitionists interviews were conducted in 2012 for the three-part series of the same name. Nominated for a Primetime Emmy for Outstanding Documentary or Nonfiction Series, Rob Rapley served as the director. In 2017, the WGBH Media Library and Archives digitized The Abolitionists interviews and in 2018 submitted them to the American Archive of Public Broadcasting. 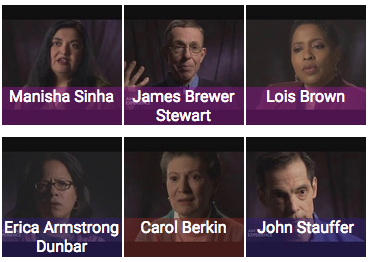 Manisha Sinha is Professor of Afro-American Studies at the University of Massachusetts, Amherst. She is the author of “The Counterrevolution of Slavery: Politics and Ideology in Antebellum South Carolina” (University of North Carolina Press, 2000) and “To Live and Die in the Holy Cause: Abolition and the Origins of America’s Interracial Democracy.”

James Brewer Stewart, James Wallace Professor of History Emeritus, Macalester College, retired, and the founder and director of Historians Against Slavery. Stewart’s books include Holy Warriors: The Abolitionists and American Slavery. He has published biographies of four very well-known enemies of slavery: Joshua R. Giddings, Wendell Phillips, William Lloyd Garrison, and Hosea Easton. His most recent books include Abolitionist Politics and the Coming of the Civil War (2008) and Venture Smith and the Business of Slavery and Freedom (2009).

Lois Brown is a professor in the African American Studies Program and the Department of English at Wesleyan University. Brown’s scholarship and research focus on African American and New England literary history and culture.

Erica Armstrong Dunbar, associate professor of Black American Studies with joint appointments in history and in women and gender studies at the University of Delaware.

John Stauffer is Chair of the History of American Civilization and Professor of English and African and African American Studies at Harvard University. Among his works include: GIANTS: The Parallel Lives of Frederick Douglass and Abraham Lincoln (2008), The Writings of James McCune Smith: Black Intellectual and Abolitionist (2006), and The Problem of Evil: Slavery, Freedom.