At the AAPB “Crowdsourcing Anecdotes” meeting last Friday at the Association of Moving Image Archivists conference, I talked about a free “Dockerized” build of Kaldi made by Stephen McLaughlin, PHD student at UT Austin School of Information. I thought I would follow up on my introduction to it there by providing links to these resources, instructions for setting it up, and some anecdotes about using it. First, the best resource for this Docker Kaldi and Stephen’s work is here in the HiPSTAS Github: https://github.com/hipstas/kaldi-pop-up-archive. It also has detailed information for setting up and running the Docker Kaldi.

I confess that I don’t know much about computer programming and engineering besides what I need to get my work done. I am an archivist and I eagerly continue to gain more computer skills, but some of my terminology here might be kinda wrong or unclear. Anyways, Kaldi is a free speech-to-text tool that interprets audio recordings and outputs timestamped JSON and text files. This “Dockerized” Kaldi allows you to easily get a version of Kaldi running on pretty much any reasonably powerful computer. The recommended minimum is at least 6gb of RAM, and I’m not sure about the CPU. The more of both the better, I’m sure.

The Docker platform provides a framework to easily download and set up a computer environment in which Kaldi can run. Kaldi is pretty complicated, but Stephen’s Docker image (https://hub.docker.com/r/hipstas/kaldi-pop-up-archive) helps us all bypass setting up Kaldi. As a bonus, it comes set up with the language model that PopUp Archive created as part of our IMLS grant (link here) with them and HiPSTAS. They trained the model using AAPB recordings. Kaldi needs a trained language model dataset to interpret audio data put through the system. Because this build of Kaldi uses the PopUp Archive model, it is already trained for American English.

I set up my Docker on my Mac laptop, so the rest of the tutorial will focus on that system, but the GitHub has information for Windows or Linux and those are not very different. By the way, these instructions will probably be really easy for people that are used to interacting with tools in the command line, but I am going to write this post as if the reader hasn’t done that much. I will also note that while this build of Kaldi is really exciting and potentially useful, especially given all the fighting I’ve done with these kinds of systems in my career, I didn’t test it thoroughly because it is only Stephen’s experiment complimenting the grant project. I’d love to get feedback on issues you might encounter! Also I’ve got to thank Stephen and HiPSTAS!! THANK YOU Stephen!!

SET UP AND USE:

The first step is to download Docker (https://www.docker.com/). You then need to go into Docker’s preferences, under Advanced, and make sure that Docker has access to at least 6gb of RAM. Add more if you’d like.

Then navigate to the Terminal and pull Stephen’s Docker image for Kaldi. The command is “docker pull -a hipstas/kaldi-pop-up-archive”. (Note: Stephen’s GitHub says that you can run the pull without options, but I got errors if I ran it without “-a”). This is a big 12gb download, so go do something else while it finishes. I ate some Thanksgiving leftovers.

When everything is finished downloading, set up the image by running the command “docker run -it –name kaldi_pua –volume ~/Desktop/audio_in/:/audio_in/ hipstas/kaldi-pop-up-archive:v1”. This starts the Kaldi Docker image and creates a new folder on your desktop where you can add media files you want to run through Kaldi. This is also the place where Kaldi will write the output. Add some media to the folder BUT NOTE: the filenames cannot have spaces or uncommon characters or Kaldi will fail. My test of this setup ran well on some short mp4s. Also, your Terminal will now be controlling the Docker image, so your command line prompt will look different than it did, and you won’t be “in” your computer’s file system until you exit the Docker image.

Now you need to download the script that initiates the Kaldi process. The command to download it is “wget https://raw.githubusercontent.com/hipstas/kaldi-pop-up-archive/master/setup.sh”. Once that is downloaded to the audio_in folder (and you’ve added media to the same folder) you can run a batch by executing the command “sh ./setup.sh”.

Kaldi will run through a batch, and a ton of text will continue to roll through your Terminal. Don’t be afraid that it is taking forever. Kaldi is meant to run on very powerful computers, and running it this way is slow. I tested on a 30 minute recording, and it took 2.5 hrs to process. It will go faster the more computing power you assign permission for Docker to use, but it is reasonable to assume that on most computers the time to process will be around 5 times the recording length.

When Kaldi is done processing, the text output will be in the “audio_in” folder, in the “transcripts” folder. There will be both a JSON and txt file for every recording processed, named the same as the original media file. The quality of the output depends greatly on the original quality of the recording, and how closely the recording resembles the language model (in this case, a studio recording of individuals speaking standard American English). That said, we’ve had some pretty good results in our tests. NOTE THAT if you haven’t assigned enough power to Docker, Kaldi will fail to process, and will do so without reporting an error. The failed files will create output JSON and txt files that are blank. If you’re having trouble try adding more RAM to Docker, or checking that your media file is successfully converting to broadcast WAV. 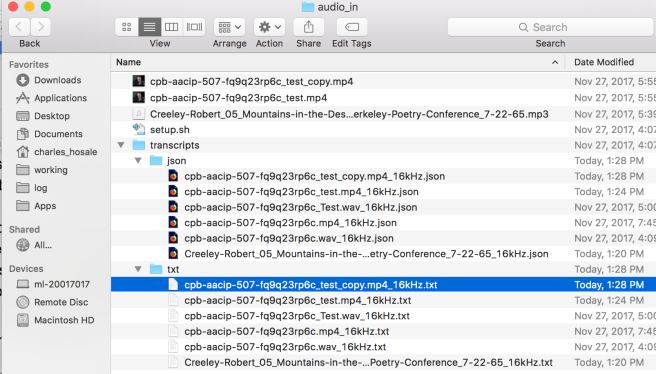 When you want to return your terminal to normal, use the command “exit” to shut down the image and return to your file system.

When you want to start the Kaldi image again to run another batch, open another session by running “docker start /kaldi_pua” and then “docker exec -it kaldi_pua bash”. You’ll then be in the Kaldi image and can run the batch with the “sh ./setup.sh” command.

I am sure that there are ways to update or modify the language model, or to use a different model, or to add different scripts to the Docker Kaldi, or to integrate it into bigger workflows. I haven’t spent much time exploring any of that, but I hope you found this post a helpful start. We’re going to keep it in mind as we build up our speech-to-text workflows, and we’ll be sure to share any developments. Happy speech-to-texting!!

View all posts by cmhosale