Greetings from Day 2 of the International Association of Sound and Audiovisual Archives (IASA) conference in Washington DC. This is my first time going to IASA, and I’m still not totally clear on the pronunciation of the acronym. “Eye-ah-suh” seems to be most popular but I’ve been hearing “Ee-ah-suh” too. This is likely due to IASA being an international organization, with presenters at the conference from Australia, France, Germany, Austria, China, Sweden, Japan, Norway, France, Czech Republic, and the USA. Surprisingly, I have not witnessed any jet-lagged induced freakouts while waiting in long coffee lines.

I was lucky enough to present with my NDSR AAPB cohort on the first night of the conference, so now I can breathe steady and just enjoy the conference without the impending fear of forgetting how to use the english language when a microphone is put in front of me (that didn’t happen, btw). You’ll be able to hear more about our presentation and see our slides in a later post. 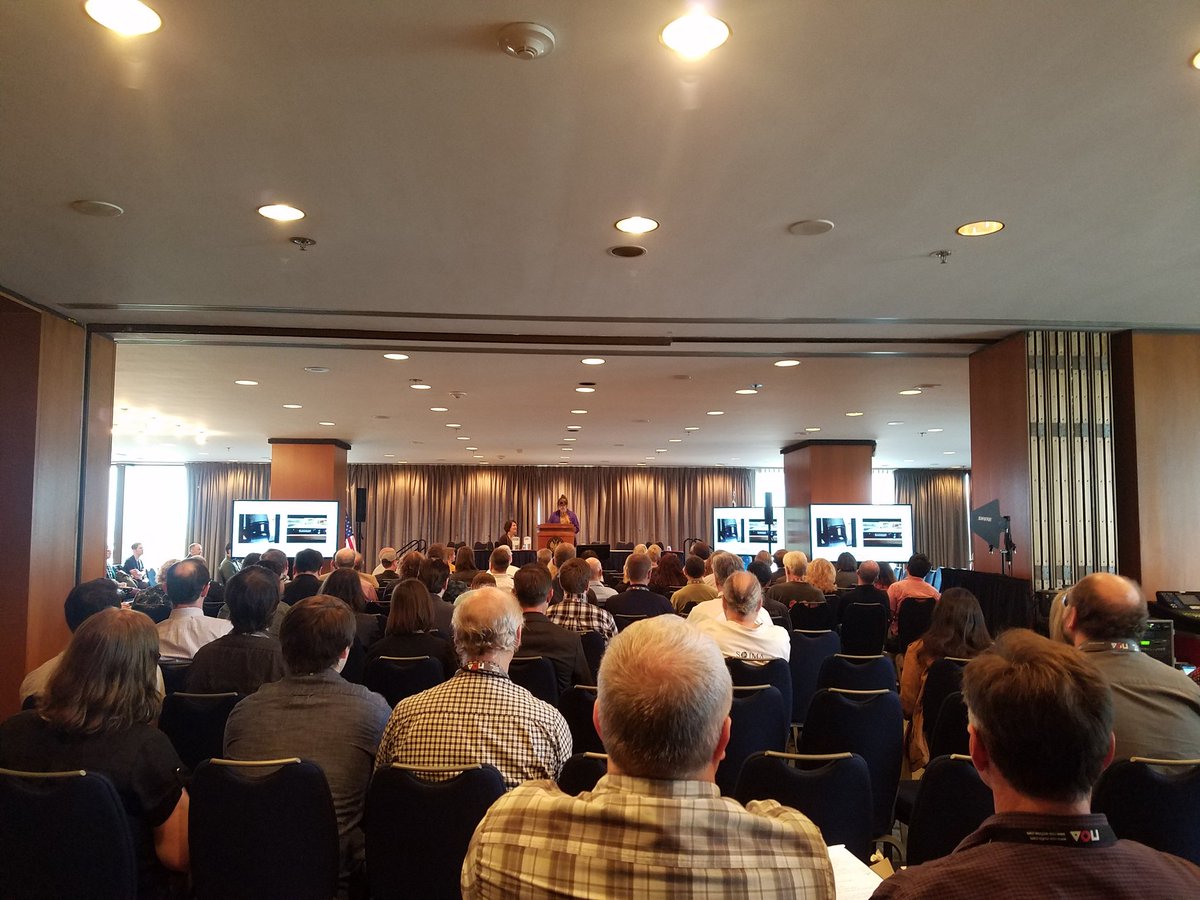 The second day of the conference started off with Oliver Morgan presenting the recently unveiled AS-07 MXF specification. I’ve sort of peripherally been aware of IASA as the organization that comes out with specifications and standards that have titles reminiscent of Star Wars droids, notably the TC-0# documents which provide guidelines on the safeguarding of audio and video materials. AS-07 is not an IASA specification but would still make for a good droid name, maybe “esso” for short like “Threepio” or “R2.” AS-07, which was developed by FADGI and AMWA, defines the use of the MXF file format for digital audiovisual materials, building off of existing standards from SMPTE.

Ok, lots of acronyms in that last paragraph. FADGI (Federal Agencies Digitization Guidelines Initiative) was started by the digital preservation guru Carl Fleischhauer (whom I got to meet at the reception, where he complimented my twitter feed *brushes dirt off shoulder*) in 2007 as “a collaborative effort by federal agencies to define common guidelines, methods, and practices for digitizing historical content.” AMWA (Advanced Media Workflow Association, Inc.) is an association (funded almost entirely by membership dues) which liaisons with various standards bodies to develop specifications such as AAF (Advanced Authoring Format) as well as Best Current Practices publications. SMPTE (Society of Motion Picture and Television Engineers) is a standards body and professional organization that is responsible for, basically, how TV works (I know, I know, oversimplifications abound). Finally, MXF (Material eXchange Format) is a highly flexible audiovisual file format that allows for a large amount of embedded metadata. Before entering the field of audiovisual archiving I wasn’t familiar with the MXF format, and I was surprised to learn that it is over 20 years old.

There are sample files that are compliant to the specification available from AMWA, but Morgan admits that these files are not as “gold” as they originally hoped. In fact, they may not play at all, or crash the computer they’re running on if they do play. But there’s significant incentive to improve these files, as many vendors would like to advertise their equipment as “AS-07 compliant.” You can download those files here: http://www.digitizationguidelines.gov/guidelines/MXF_app_sampleFiles.html.

One of the foci of Morgan’s talk was how captions are encoded into video files. I have a selfish interest in this as I have been pretty perplexed by this issue at my current position at Louisiana Public Broadcasting. I have previously worked mostly with material created by artists or experimental filmmakers, who could frankly give a flying f*** about broadcast standards, so working with captions that conform to those standards is completely new to me. Morgan provided a quick primer on the development of caption standards. Line 21 of a video signal (analog video is divided into 525 horizontal lines, with 486 lines constituting the “active picture area,” and the remaining lines saved for synchronization pulses and other information) was reserved for captions in 1976. This practice, standardized for NTSC broadcast through CEA 608 (also known as EIA-608), stipulated that captions be encoded as binary data. CEA-708 was introduced for digital television broadcasts, but captions remained encoded as binary data. There’s a disadvantage to this binary encoding in that it’s not human readable. Luckily, there are formats like XML that are both human readable and machine readable. AS-07 specifies options to translate binary-format captions and subtitles to XML Timed Text.

If this all seems really technical, imagine someone telling you about it first thing in the morning.

The tech-fest continued with Dave Rice presenting on the Status of CELLAR: Update from an IETF Working Group for Archival Audiovisual Formats followed by Marie Lascu and Dinah Handel presenting on LTO storage technology in audiovisual archives.

It was great to break out of this mindset with Pio Pellizzari’s tutorial on “Selection in the Digital Age?”. The question mark in the title of this conference session is emblematic of how the tutorial went. Pellizaari essentially posed questions about the nature of selection for archives in an environment where content and culture are constantly being created and collected by just about everyone. The conference staff, who were very gracious, were running around the room for an hour and a half passing microphones to the attendees, and we all shared our thoughts. Of course, no catch all solution was found in 90 minutes, but we brainstormed some great ideas about working with producers and developing networks with interested parties (there were some group therapy-esque expressions of frustrations and insecurities, too).

And then, following all that, we ate lunch. After which, there was a whole afternoon’s worth of other interesting and exciting presentations. With two more days to go! You can follow along on twitter using the #iasa_web hashtag, and get more information on the conference through the IASA website.

This post was written by Eddy Colloton, resident at Louisiana Public Broadcasting.

One thought on “Snapshot from the IASA Conference: Thoughts on the 2nd Day”