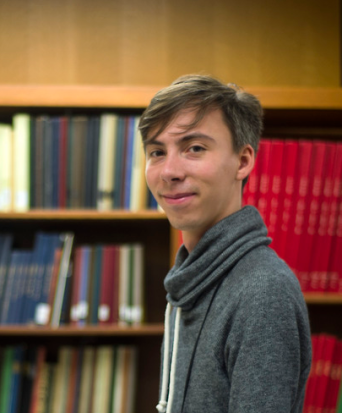 Hi! I’m Charles Hosale, and I’m very glad
to be joining the AAPB team as a Special Projects Assistant at WGBH. I come from Milwaukee, Wisconsin, where I worked as the AV Project Archivist at the University of Wisconsin-Milwaukee. I’ve also been a Contract Archivist for MillerCoors and Robert W. Baird & Co. I’m really excited to be able to contribute to AAPB because it is a project I’ve been enthusiastic about since it began!

At WGBH I will be working on a few different projects. On the NET Collection Catalog Project, I will be working to create robust catalog records and doing historical research into titles for which little information exists. For the NewsHour Digitization Project, I will be cataloging titles, processing transcripts, working with our vendors to ensure the quality of digitized episodes, and ingesting the files into our digital holdings. I’ll be handling ingestion and quality control for the American Masters Digital Archive Project too. I’ll also be adding some records besides NewsHour and American Masters to the AAPB.

I developed a passion for public media while growing up watching public programing, including the NewsHour and NOVA. I became an archivist so that I could interact with a different story every day, and could help keep those stories safe for the future. I’m grateful today to be able to work on stories that shaped me into the person I am! Even more than that I’m thrilled to increase access to and promote the records so that they can have continued use. Public media programs remain as vital today as when they were produced! Television is an interesting artistic medium to archive because, like I’ve already seen while working on the NET Project, there are some incredible productions that might have only been broadcast once and then put on the shelves, forgotten without any method of continued access. I hope that our work leads to the rediscovery of some compelling stories.

If you’d like to know a bit more about me, I received both an undergraduate in Comparative Literature and an MLIS with an Archives concentration from the University of Wisconsin-Milwaukee. When I’m not working I like to cook (I worked as a line cook during undergrad!) and listen to music. Because I lived in Milwaukee my whole life I’m looking forward to experiencing the East Coast and exploring Boston!

View all posts by cmhosale