The American Archive of Public Broadcasting (AAPB) has acquired New Hampshire Public Radio’s digital collection of interviews and speeches by presidential candidates from 1995-2007. The entire collection—nearly 100 hours of content—has been digitized and is now online, along with other presidential campaign content from the AAPB collection, in a new curated, free presentation, “Voices of Democracy: Public Media and Presidential Elections” at americanarchive.org/exhibits/presidential-elections.

AAPB, a collaboration between the Library of Congress and the WGBH Educational Foundation, preserves and makes accessible the most significant public television and radio programs of the past 60-plus years. 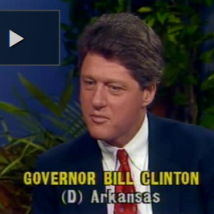 “Voices of Democracy” features historical interviews, panel discussions, speeches and debates among presidential candidates from 1961 to 2008. These historical materials document the evolution of issues and presidential candidates’ positions on important election topics including the American economy, education, religion, civil rights, foreign policy, climate and the environment, labor and unions and campaign and election reform. The materials also document public broadcasting’s coverage of the process of elections and voter rights, as well as commentary and analysis of campaigns. The presidential elections presentation was curated by Lily Troia, a graduate student at Simmons College.

A centerpiece of the presentation is the new content from New Hampshire Public Radio (NHPR). “We are fortunate to live at the epicenter of the political universe every four years. It is from this vantage that we are able to capture and keep some of the most memorable and historic moments in the past 35 years of our democracy,” offered Betsy Gardella, president and CEO of New Hampshire Public Radio. “Knowing that this archive can now be tapped and used by anyone with internet access is an extension of our public service mission realized, we are grateful for the AAPB.”

AAPB in October officially launched its Online Reading Room, which now features 2.5 million inventory records and more than 11,500 audiovisual streaming files of historical content dating back to the 1940s, from public media stations across the country.

The Library of Congress, WGBH Boston and the Corporation for Public Broadcasting, in collaboration with more than 100 stations and archives, have embarked on an unprecedented initiative to preserve historical public television and radio programs. This extraordinary material includes national and local news and public affairs programs, local history productions that document the heritage of our many, varied regions and communities and programs dealing with education, environmental issues, music, art, literature, dance, poetry, religion and filmmaking on a local level. The project ensures that this valuable source of American social, cultural and political history and creativity will be saved and made accessible for current and future generations.

More information is available at americanarchive.org.

About The Library of Congress
The Library of Congress, the nation’s first-established federal cultural institution, is the world’s preeminent reservoir of knowledge, providing unparalleled collections and integrated resources to Congress and the American people. The Library holds the largest collection of audio-visual recordings in the world and has been collecting and preserving historically, culturally and aesthetically significant recordings in all genres for nearly 120 years. Many of the Library’s rich resources and treasures may also be accessed through the Library’s website, www.loc.gov.

About WGBH
WGBH Boston is America’s preeminent public broadcaster and the largest producer of PBS content for TV and the web, including “Masterpiece,” “Antiques Roadshow,” “Frontline,” “Nova,” “American Experience,” “Arthur,” “Curious George,” and more than a dozen other prime-time, lifestyle, and children’s series. WGBH also is a leader in educational multimedia, including PBS LearningMedia, and a pioneer in technologies and services that make media accessible to the 36 million Americans who are deaf, hard of hearing, blind, or visually impaired. WGBH has been recognized with hundreds of honors: Emmys, Peabodys, duPont-Columbia Awards … even two Oscars. Find more information at www.wgbh.org.

About CPB
The Corporation for Public Broadcasting (CPB), a private, nonprofit corporation created by Congress in 1967, is the steward of the federal government’s investment in public broadcasting. It helps support the operations of more than 1,400 locally-owned and operated public television and radio stations nationwide, and is the largest single source of funding for research, technology, and program development for public radio, television and related online services. Visit us at www.cpb.org

About NHPR
Since 1981, NHPR has shaped the media landscape in the Granite State and beyond. Its mission is to help create a more informed public, one challenged and enriched by a deeper understanding and appreciation of state, national, and world events, ideas, and culture. NHPR is broadcast from 13 different sites, making it by far New Hampshire’s largest (and only) statewide radio news service. Every week NHPR is the choice of more than 178,000 listeners as a primary source of in-depth and intelligent news coverage. Each day New Hampshire Public Radio delivers several hours of local news reported by NHPR’s award-winning news department, locally produced shows such as “The Exchange” and “Word of Mouth,” and national and world news from NPR and the BBC. NHPR is the exclusive outlet for NPR news in the Granite State and broadcast national weekly programs such as “Fresh Air,” “Wait Wait … Don’t Tell Me!” and “This American Life.”